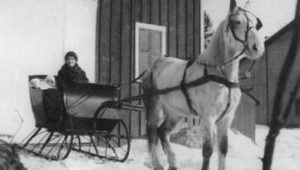 Notable relative:  Marcia came in with a fun story about her photo.  Her relative, Florence Chauncey, was the first woman to vote in a New York election once it became legal.  The wife of a local minister, she cast her vote in the morning at 6:10 a.m. on Jan. 5, 1918. Marcia brought in her
dog filmsfilm clipsfirst woman voterFort Collinsleave a legacyphoto restorationrecord transfer
Read more
No Comments